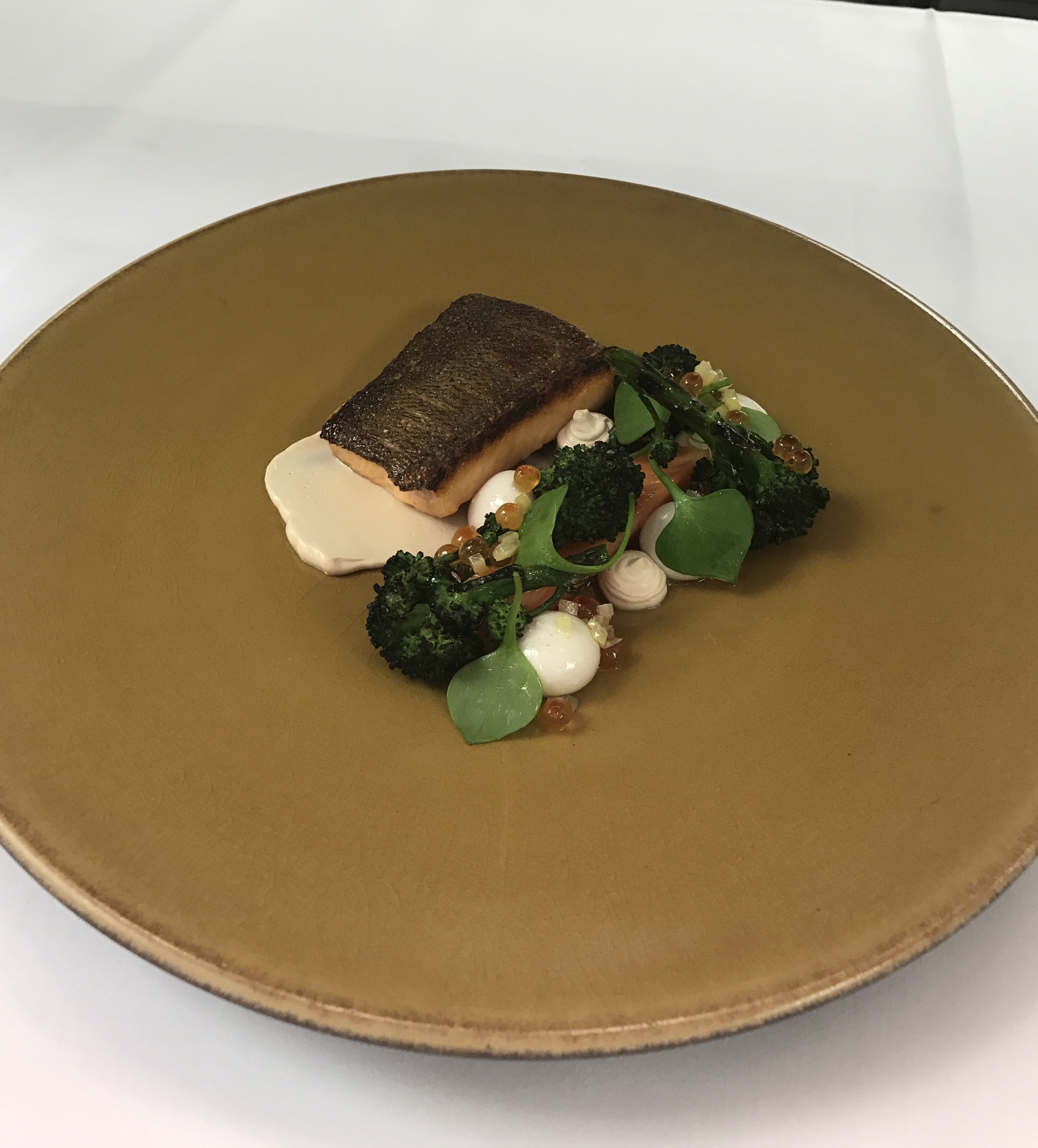 This is the First Tester of a Trout, Almond and Broccoli dish Steve and I have been working on.

When the Trout arrives in the kitchen we take the centre piece of fish, cure it in a salt/sugar mix for 20 mins. After that it gets cold smoked for 5 mins. The belly piece of Trout I really like because it carries slightly more fat and delicious either raw or very lightly cooked.

For the garnish of the dish I made a roasted Almond Puree, an almond soup which is the sauce for the dish which I turned into little spheres using a technique called ‘reverse spherefication’ a chemical reaction occurs when the calcium in the soup reacts with the Sodium Alginate bath forming a skin around the sphere allowing the centre to remain in liquid form. All chemicals can be found from the MSK website.

The purple sprouting broccoli gets blanched in salted water and finished on our indoor BBQ.

I made a dressing from caviar, pickled lemon and olive oil.

The belly of Trout gets confit in oil at 40 degrees for 10 mins and topped with toasted nibbed almonds. 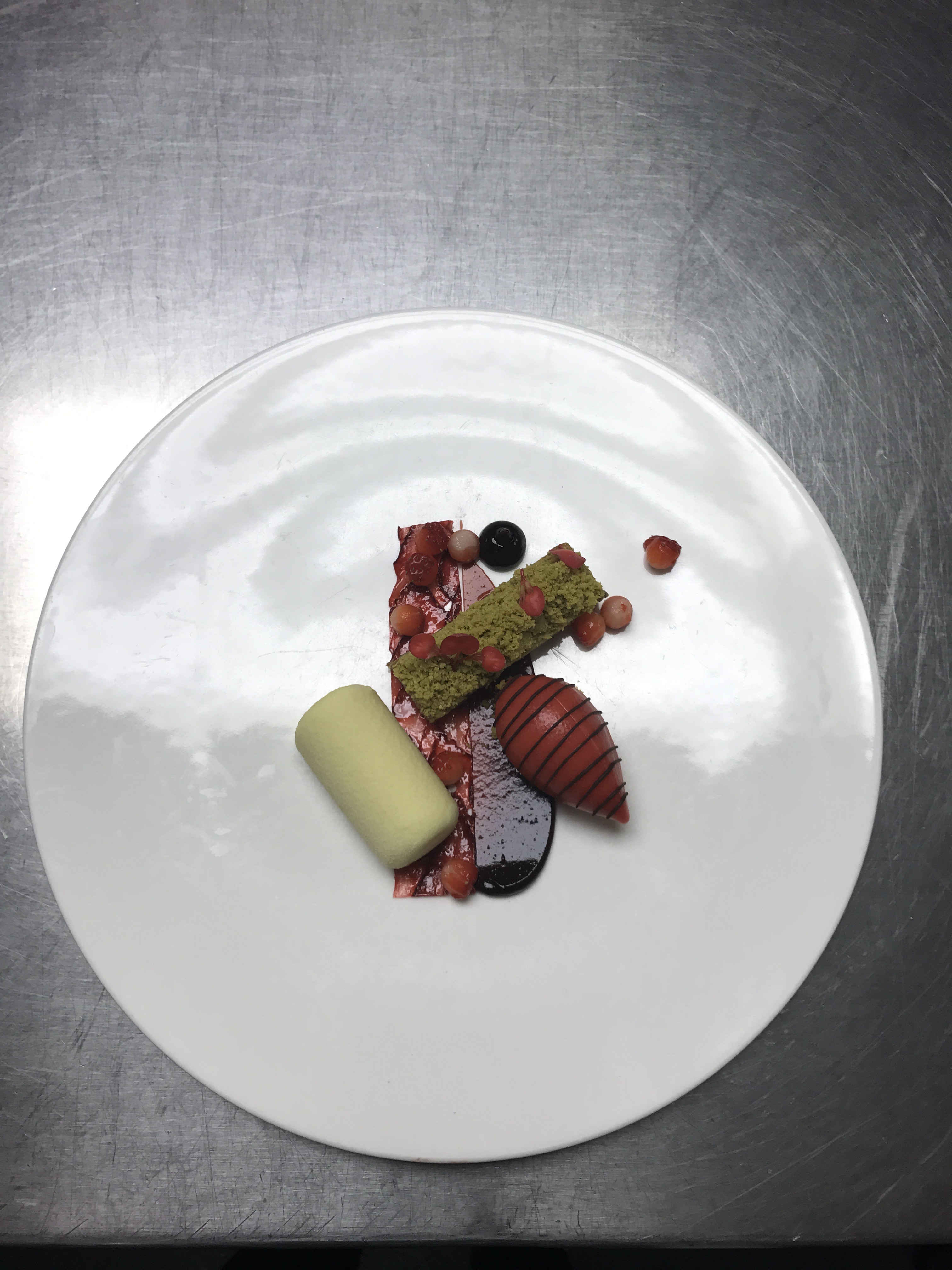 This is the first tester of a dish that I’m looking to put on the menu for summer, it has simple flavours combined with a handful of modern techniques that for me, deliver a great dish. 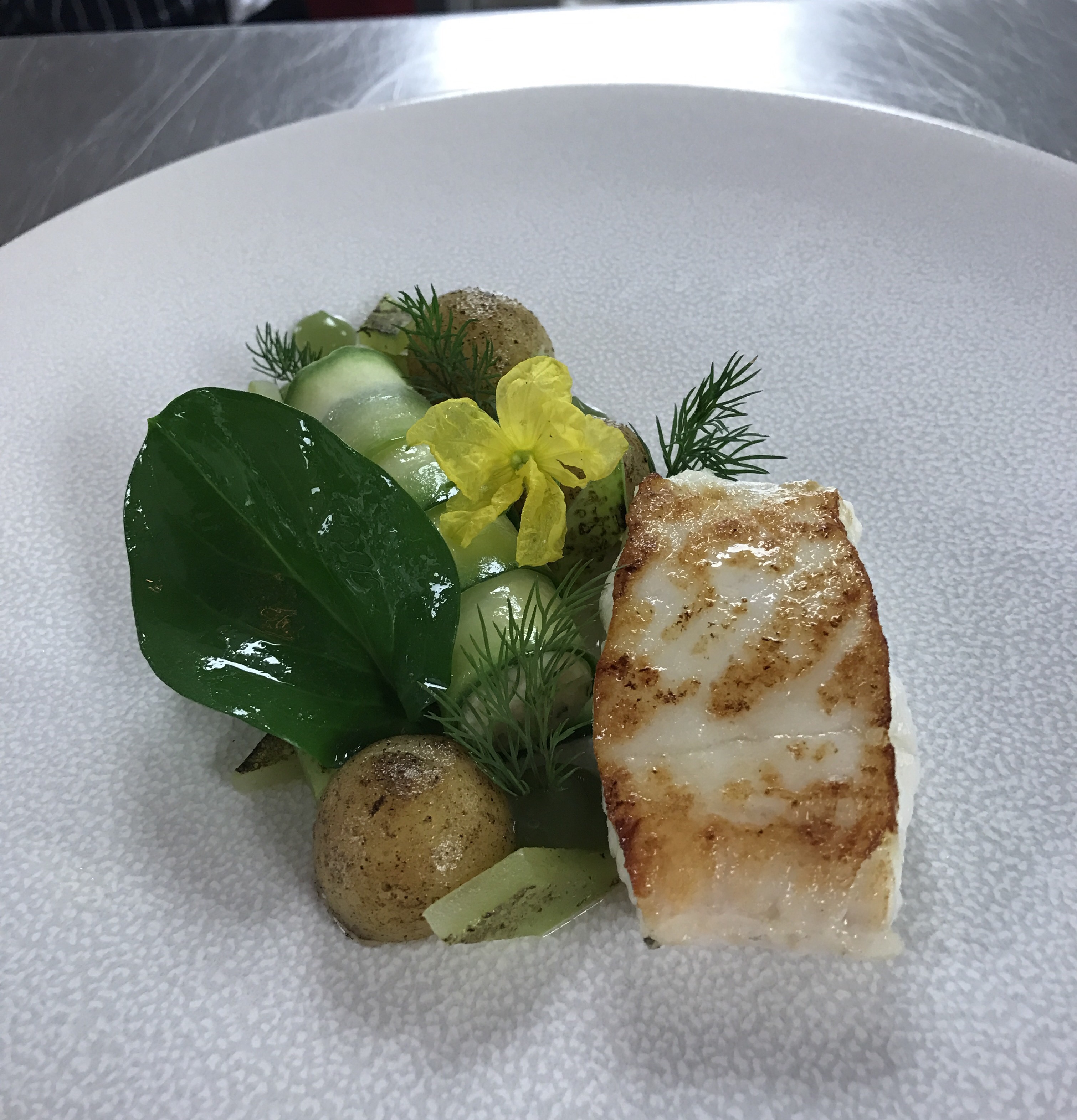 In the restaurant we tend to have a lot of wastage when we use ingredients such as Cod.

So with this dish I’ve utilised all of the Elements.

The cod loin has been salted to draw out some water, then tied in cling film to keep a natural shape when cooking.

The trim from the belly I turned half into a mouse using the paco jet, and other half turned into salt cod which then gets diced along with dill, chives and lemon zest. Then the mouse gets wrapped in cucumber strips and steamed till the proteins are set.

Next on the dish I have some charred cucumber which gives a nice smokey/refreshing burst to the dish.

All the trimmings from cucumber gets burnt to an ash and then I dress the confit potatoes in the ash and dill oil, which brings an umami element.

All gets finished with a seaweed and Oyster beurre blanc. 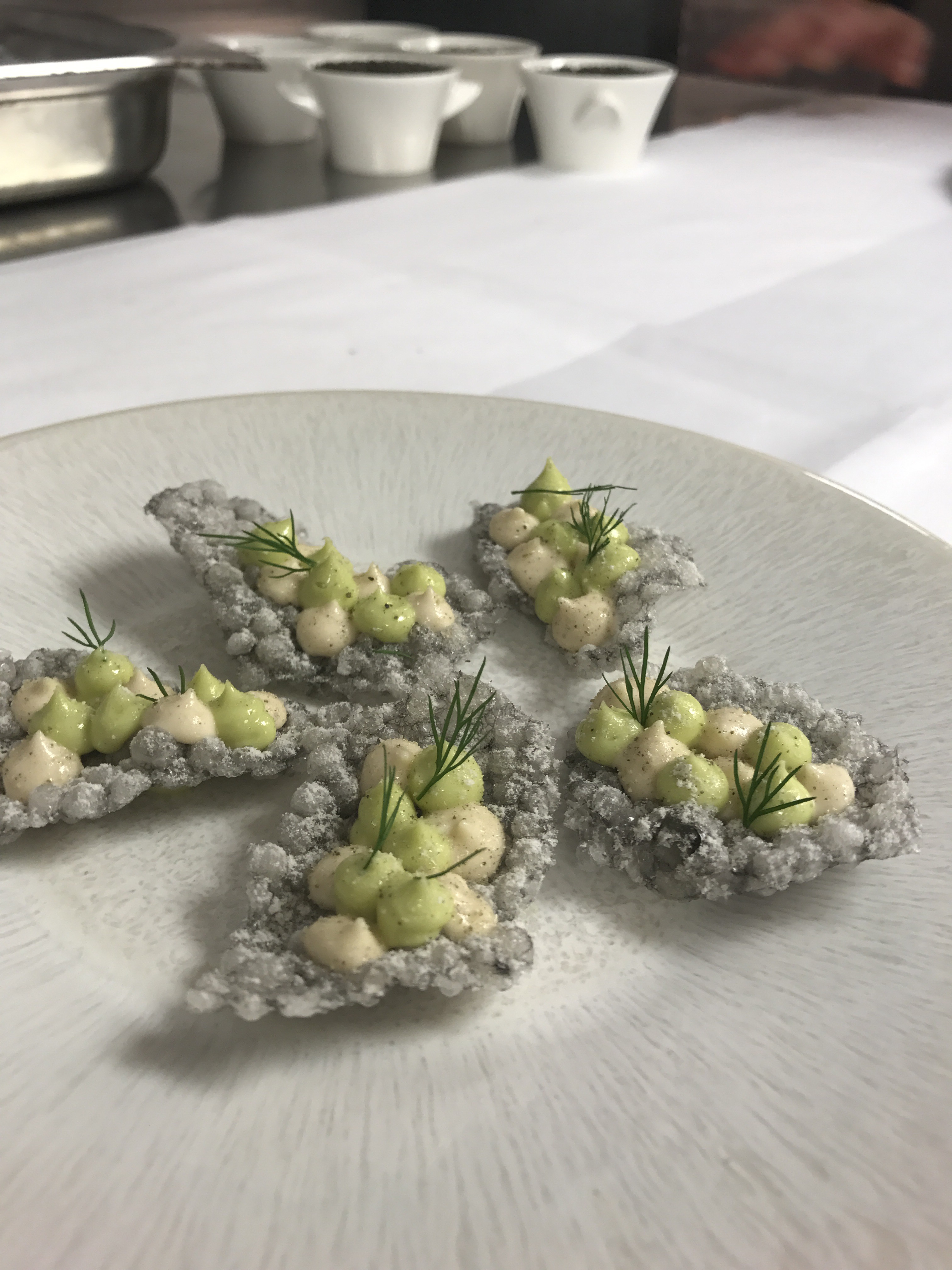 Emulsion made from a dill oil, taramasalata made from smoked cod roe.

Dusted with a powder made from dried cod skin and malt vinegar powder. 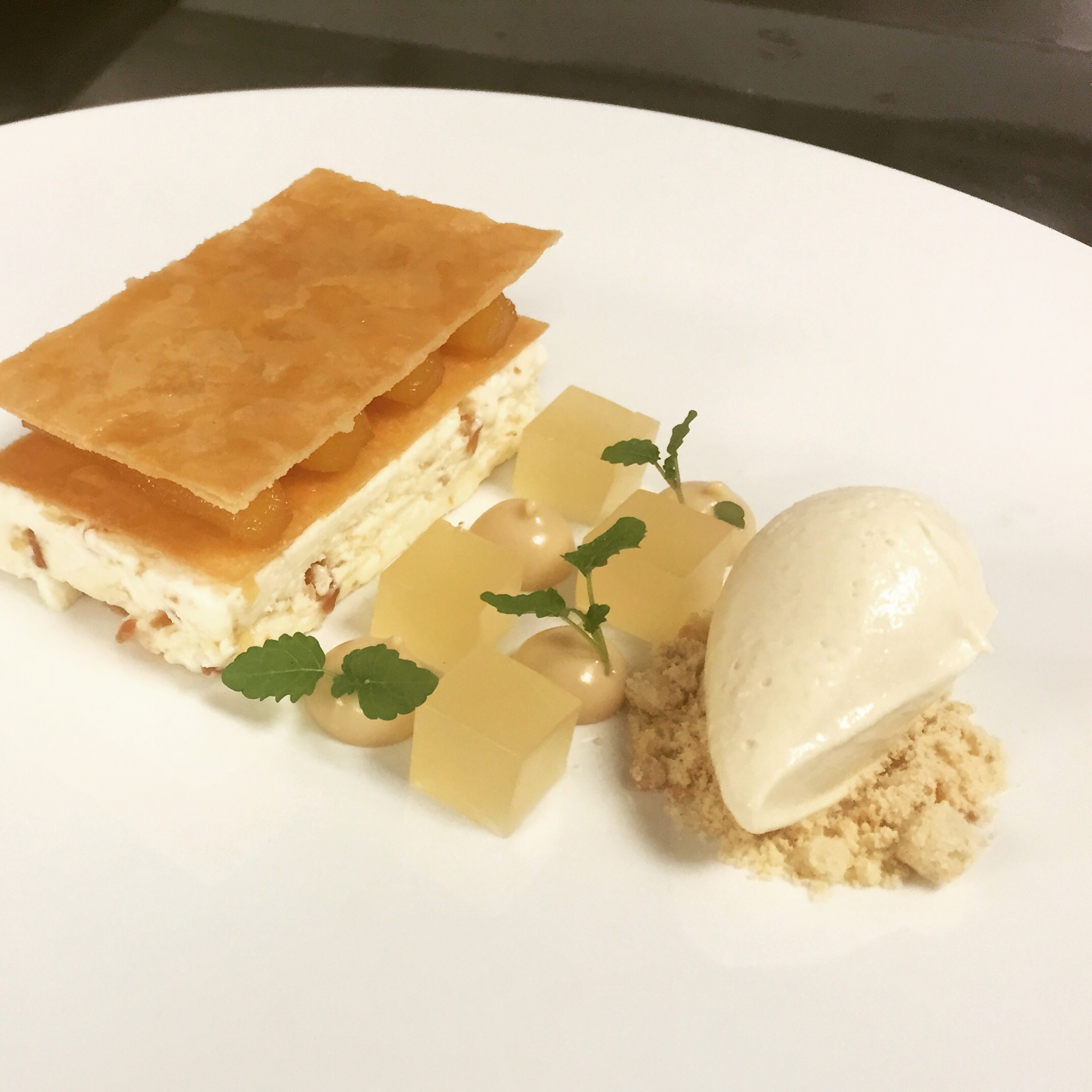 A dish I put on the lunch menu at roux, a praline parfait, between sheets of caramelised filo pastry with pink lady apples cooked sous vide in a acidulated caramel, then a parsnip and toffee puree, apple patê d’fruit 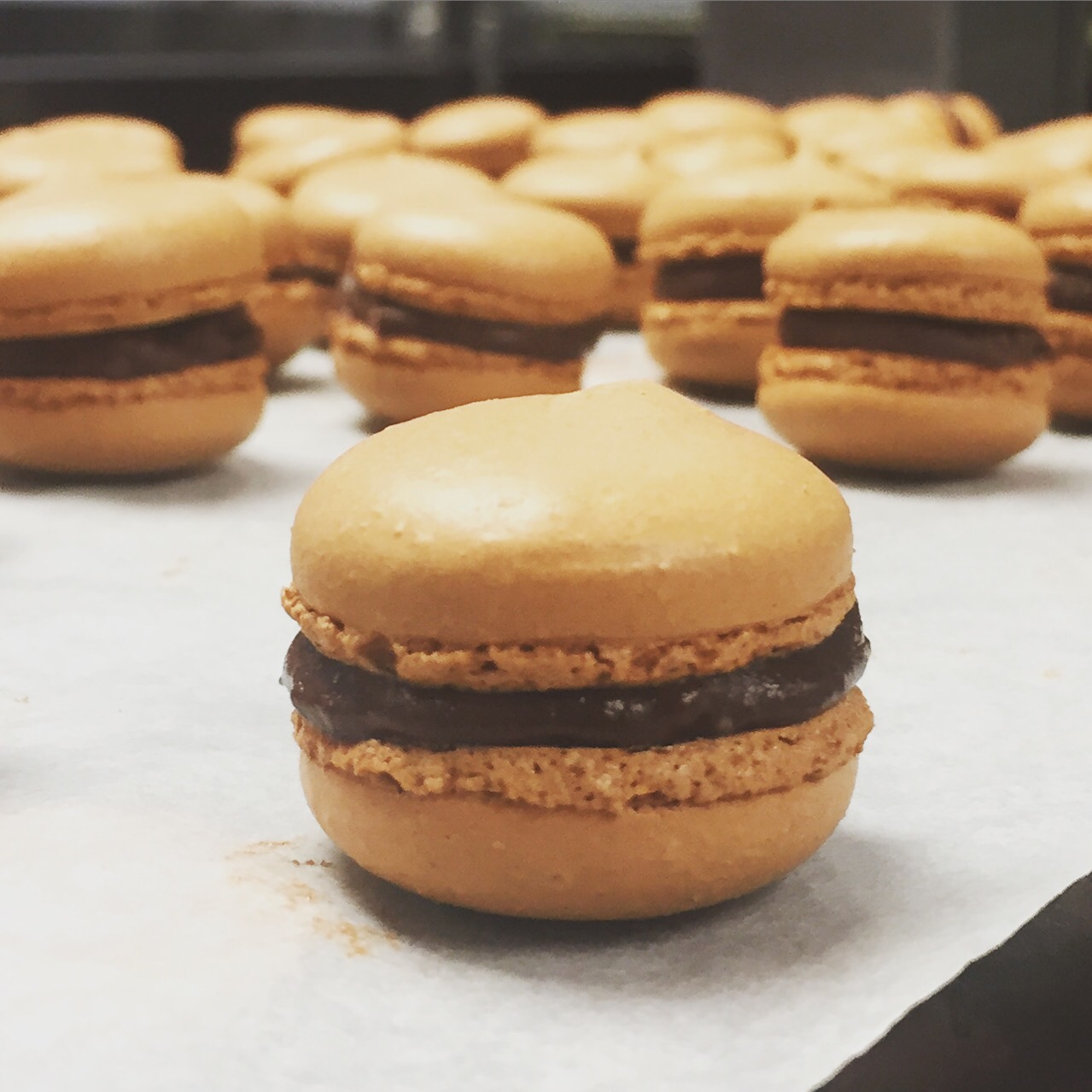 One of the petit fours I put on while working pastry at roux.

Traditionally a macaron is almond based but to enhance the flavour I used ground peanut in the shell. Then piped in a peanut praline and chocolate ganache!